Nowadays, sports are already part of a healthy lifestyle that needs to be encouraged, we can see a lot of people who exercise, from cycling, running and others. Sometimes when exercising, our bodies are exhausted so we need to drink electrolyte fluids to restore the body freshness . Or when diarrhea our body need a lot of drinking to replace the fluid loss because at that time we also lack of electrolytes , especially sodium electrolytes. This is due to dehydration. Many things can cause the weakness of the body, not only lack of salt, can also due to infectious diseases , metabolic diseases, or lack of nutrients etc. Especially for the body weakness caused by less salt it is not always necessarily to drink water or electrolyte salts!.

This condition can arise in 2 conditions. Firstly, excessive fluid buildup with the symptoms of swelling and secondly, the fluid excessive is not too visible.

The first condition is characterized by excessive body fluid with a sign and symptom of edema, this conditions often found in heart failure, renal failure and hepatic failure. In this condition, the body will feel weak because of lack of salt but there will be restrictions on drinking and salt because the addition of water and salt will burden the body.

While in the second condition, the body will feel weak because less salt but there is no sign of edema and no sign of dehydration. It often appears in some conditions such as patients with a history of cancer, stroke, chronic infections or also elderly. It needs attention and only considered as an addition to its main illness. And the provision of drinking and salt will not solve the problem in these two matters.

In both conditions, there is an increase in the body fluid caused by the increase of hormone in the body called vasopressin which has one function of increasing fluid in the body.

Thus, there is a condition where the body weakness less salt and a lot of drinking is not a solution and it can even be dangerous. This condition is called dilutional hyponatremia. 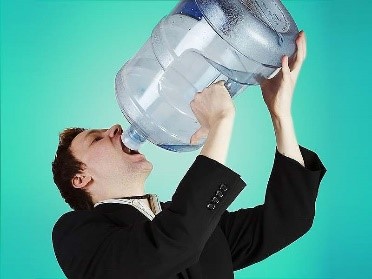